A Treasurer was first appointed at York Minster in 1071. Since then, his house has undergone many changes and it is now largely 17th century. At the front, there is a beautiful, award-winning garden in which herbaceous plants are clustered and labelled according to species.

The garden is dominated by two mature Ash trees, one on each side, about 30 metres apart. One appears perfectly healthy while the other is in an advanced state of dieback. Ewan drew these trees for the John Innes Open Day to illustrate the ravages of dieback and how two neighbouring trees can be so differently affected. 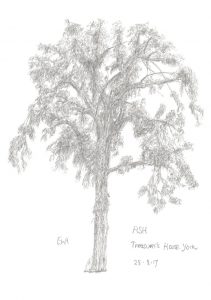 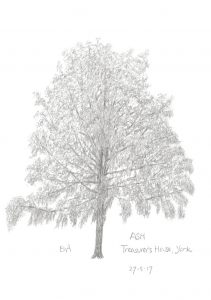